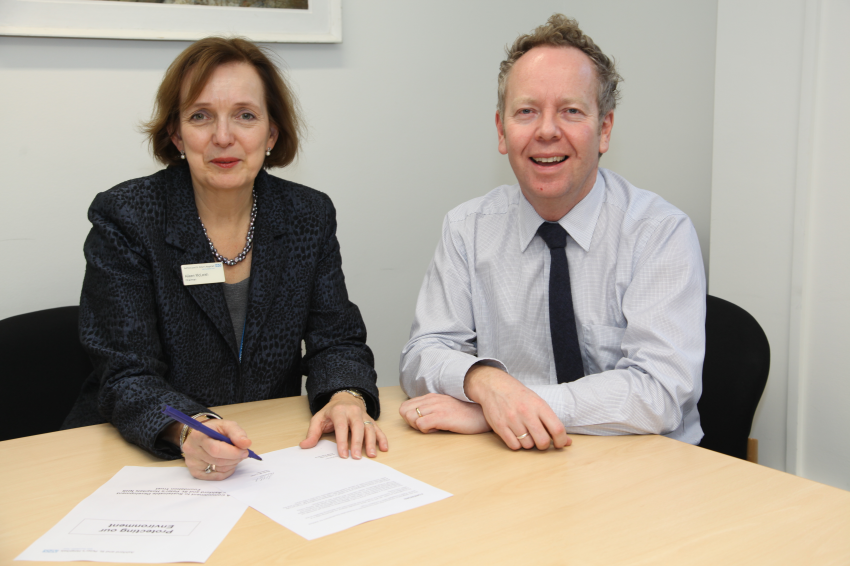 As with many other Trusts across the country the government has put in place specific sustainability targets, to reduce the carbon footprint of the NHS and protect the environment for future generations. The Trust’s Chairman Aileen McLeish and Chief Executive Andrew Liles signed our sustainability commitment this week, pledging to reducing our emissions by 10% by 2015. In terms of fuel cost this is a saving of more than £200,000 and enough CO2 saved to cover the emissions from 1000 homes.

With Climate Week 2014 (3 -9 March 2014) just around the corner, Ashford and St Peter’s Hospitals aim to use the week as an opportunity to translate the words of our pledge into action. During the week we will have interactive stands where staff, visitors and patients can find out more about the Trust’s initiatives to ensure that we make changes now that will make for a more sustainable future, including the opening of our new wildlife garden at St Peter’s Hospital - a staff initiative from last year’s Climate Week.

Chairman Aileen McLeish commented: “It is a priority for the Trust and for the NHS nationally to reduce its carbon footprint and to promote healthier lifestyles that are better for the environment. Climate change is well known to be an environmental issue; to me and many others it’s as much a “human issue” as it impacts on the issues of wellbeing and social and economic stability. We encourage our staff, patients and visitors to join in helping to make our pledge a reality; I look forward to celebrating what we have achieved so far and planning future activity with our staff’s creative input at the next Climate Week in March.” The picture shows Aileen McLeish, Chairman and Andrew Liles Chief Executive signing the commitment. Neonatal Unit at St Peter’s Hospital