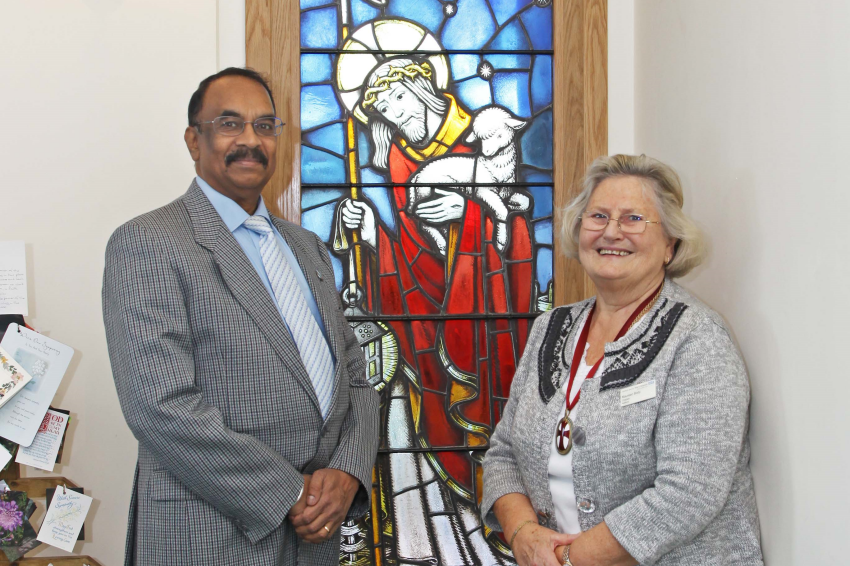 A stained glass window that has withstood all weathers in a garden for nearly 20 years has been restored to its rightful place in the Chapel at Ashford Hospital.

The window, depicting Christ with the Lamb, was donated by the Ashford Hospital Nurses’ League and Friends in 1949 in memory of Medical Director George Stephen FRCS. The old chapel was demolished in 1994 and many of the artefacts were lost; the window, which was originally placed in the south transept, is all that remains. It was removed from the old building complete with its frame and for nearly 20 years it has stood in one of the hospital gardens.

Ashford Hospital Chaplain Maureen Body said: “The woodwork had deteriorated badly and the window itself was in a poor state. In the recent high winds, it came away from its footings but, luckily, the stained glass itself survived without any damage.

“For some time I have been researching whether we could find an appropriate place for it in the present Ashford Hospital Chapel and I am delighted that we have. We are so grateful to the Ashford League of Friends who have kindly supported us in this venture together with Nigel Stevens, the Trust’s Capital Projects Manager, who has managed the project and also Rex Hurst’s construction team who have achieved all that we envisaged. Our thanks also to the Trust Chairman, Aileen McLeish and Chief Executive Andrew Liles for their support.

“Sometime in the future we will hold a Celebration of Thanksgiving and it would be appropriate if we could invite any nursing staff who trained at the Ashford School of Nursing to be with us.”

Simon Bhadye Chair of the Ashford Hospital League of Friends with Hospital Chaplain Maureen Body, in front of the stained glass window in its new home.