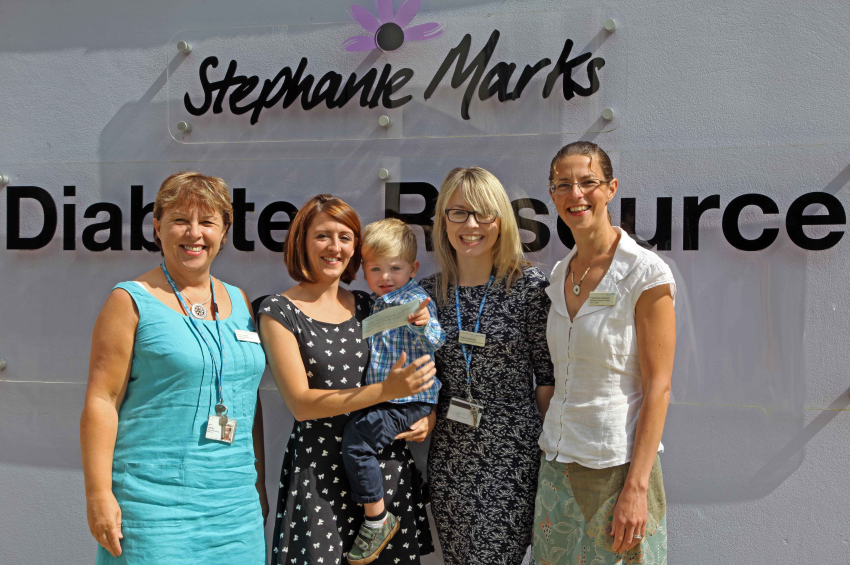 Two-and-a-half-year-old Oscar Felton looked the picture of health as he played with a train under the watchful eye of his grandfather, Duncan, in the foyer of the Stephanie Marks Diabetes Resource Centre at St Peter’s Hospital, Chertsey last week.

But 10 months ago it was a very unwell little boy who was brought into that same centre. Paediatric Diabetes Nurse Specialist Rebecca Morello said: “Oscar was one of our youngest patients when he was diagnosed in October last year. When he came to us initially he was a very tired and poorly looking little boy - all because his body wasn’t producing any insulin.

“Once we started treating him with injectable insulin Oscar soon bounced back to the adorable happy boy his family all know and love! Like many of our children, he was so brave and took everything in his stride, including the constant needles.

“Oscar is now glowing with health and happiness. That’s all thanks to the continually hard work his family put in - like so many of our other families. As their diabetes team, we endeavour to support this hard work and hope we can be there for all our families 100 per cent until there is a cure.

Oscar’s parents, Will and Apryl Felton from West Byfleet were so impressed by the care they received that they organised a dinner-dance at Cobham Rugby Club and raised £2,700 for the Stephanie Marks Centre. Oscar and Apryl were at the centre to present the cheque last Thursday (August 14).

Apryl said: “When Oscar became ill 18 months ago he spent four days here at the Stephanie Marks Centre. Everyone was so amazing in making us feel confident and comfortable with everything and when we went home they were on the phone every day to make sure we had got everything we needed. They are there all the time and I wanted to raise the money to make sure that other children and their families can get the same support because the support we got was so amazing.”

The money raised by the Feltons will go towards activity days for the children and families, tailored to their age range. This will not only provide support between families and some light relief from diabetes but the aim is also to provide informal education while having fun. The paediatric diabetes team at Ashford and St. Peter’s Hospitals look after just under 200 children with Type 1 diabetes, a life-long condition that stops the body producing insulin. It is not a condition that can be prevented and often comes as a huge shock to families.